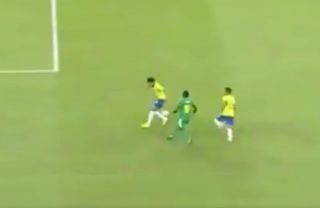 It was a Liverpool takeover in the international friendly between Brazil and Senegal on Thursday with Roberto Firmino and Sadio Mane getting on the scoresheet.

The Brazilian frontman broke the deadlock after just nine minutes to give his side the lead, as he produced a stunning finish to beat the goalkeeper from close range.

However, Mane was yet to have his say on the game and as seen in the video below, he not only won the penalty just before half-time, but he also converted it too as Senegal found an equaliser.

It was brilliant play from the 27-year-old as he nutmegged Marquinhos before sandwiching himself between two defenders as they brought him down in the box.

Mane kept his cool and produced a classy finish from the spot, and so now it remains to be seen who has the last word to potentially secure the victory in an entertaining encounter that Liverpool fans in particular would have enjoyed.

The Mane in Liverpool is always
the Mane in Senegal #BRAxSEN

We used to have a Mané who could do this, didn't we?