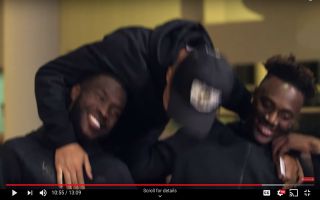 Some Chelsea fans will be excited to see that wing wizard Jadon Sancho absolutely loves having Chelsea stars Tammy Abraham and Fikayo Tomori in the England squad.

The 19-year-old hugged the pair when he was walking past their video shoot alongside Manchester United star Marcus Rashford.

Sancho clearly loves having the Chelsea pair in England’s first-team squad, he couldn’t help but gatecrash their video:

Sancho and Tammy linkup at the Bridge soon ?? pic.twitter.com/T3JeK9zmTn

Sancho is coming Chelsea, it’s pretty much a fact
pic.twitter.com/ruuZRPvwDU

Sancho is one of the best young players in the world right now and he’s quickly becoming a crucial part of Gareth Southgate’s England team.

It’s not surprising to see that the ace was over the moon to see the Chelsea duo in the Three Lions’ senior squad as the ace is a Blues fan.

In an interview with the Telegraph, Sancho revealed that he supports the Blues. Chelsea fans will also love some of these tweets from his old Twitter account.