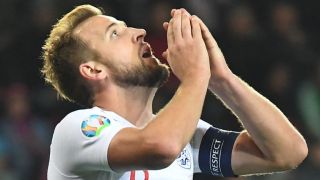 England have boasted a brilliant record in qualifying for major tournaments in recent years, but they suffered a big setback on Friday night.

Gareth Southgate saw his side fall to a 2-1 defeat to Czech Republic in Prague, with Harry Kane’s opener cancelled out as Zdenek Ondrasek emerged as the hero for the hosts.

While it shouldn’t be a hugely damaging blow in the bigger picture in terms of their ability to qualify, it was still an unwanted setback given how impressive they’ve been to date.

Further, it also brought to an end a superb run in qualifying for the World Cup and European Championship, as noted in the tweet below.

England were unbeaten in 43 qualifying matches dating back to October 2009, and so they will undoubtedly be bitterly disappointed to see that run come to an end.

Focus will quickly switch to their clash with Bulgaria on Monday night as they won’t want to suffer back-to-back defeats, but the lacklustre and poor nature of their performance in Prague on Friday will certainly add to the disappointment of their impressive record coming to an end.

Their opponents deserve plenty of credit for the display that they put in though, and there will arguably be few who believe that they didn’t warrant securing all three points on the night.

It’s a win that moves them level at the top of Group A in qualifying for Euro 2020, although the Czechs have played a game extra and so they’ll have to hope for another England slip up in Bulgaria next week to have a chance of leapfrogging them into top spot.