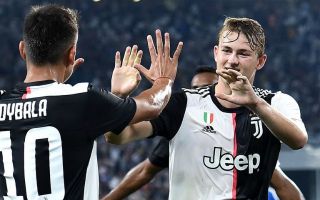 The Dutchman established himself as one of the finest centre-backs in Europe thanks to his brilliant performances for Ajax last season. De Ligt played 55 matches across all competitions, scoring seven goals while providing four assists as he led the Amsterdam club to a domestic double and the semifinals of the Champions League.

His performances propelled Juventus to sign him this summer for a transfer fee of €75 million as claimed by the club’s official website. De Ligt has featured in seven matches for the Bianconeri this season and with Giorgio Chiellini out for several months due to an injury, the Dutchman will most likely receive more first-team opportunities in the upcoming fixtures.

According to Don Balon, Messi wants the 20-year-old at Camp Nou as a replacement for Gerard Pique when he leaves the club. The report also claims that the Barcelona captain wants the La Liga giants to make a move for De Ligt quickly as he fears Real Madrid may also try to sign him.

The Dutch international hasn’t had the best of starts to his Juventus career but he is someone who is bound to become a big name in the future. Hence, he could well be a suitable replacement for Pique at Barcelona when the former Spanish international leaves Camp Nou.