England take on Czech Republic in Prague tonight, as Gareth Southgate’s side look to keep up their 100% start to Euro 2020 qualifying.

The Three Lions have won all of their four games in group A so far, scoring 19 goals in the process, with Southgate’s men looking to make it five wins from five when they come against up Czech Republic tonight.

England have already beaten tonight’s opponents in Euro qualifying this year, hammering them 5-0 at Wembley back in March.

Southgate’s side will be hoping for a similar result tonight, as they look to secure qualification for the 2020 European Championships as soon as possible.

We should expect to see Southgate go with a very strong line-up considering tonight’s clash is arguably the most difficult task England are going to be faced with throughout this qualifying campaign.

Given how he’s been for Chelsea recently, Southgate should seriously consider dropping Kane for Tammy Abraham.

The Blues forward has bagged eight goals in eight league games so far this year, whilst Kane, who’s usually prolific for the Three Lions, has managed just five.

Sterling and Sancho should be selected to start alongside Abraham in attack given the fact that the forms of England’s other forwards, such as Marcus Rashford, have been below-par as of late.

England fans should also expect to see Abraham’s Chelsea teammate, Mason Mount, claim his first Three Lions start tonight following a report from Sky Sports stating that the midfielder is set to do so.

Mount should start alongside Rice and Henderson in a midfield three, replacing Ross Barkley in the Three Lions’ starting line-up from the team that beat Kosovo 5-3 last month.

Given Aaron Wan-Bissaka’s recent injury troubles, Trent Alexander-Arnold is most likely to start at right back in Prague, with the Liverpool man being joined by Harry Maguire, one of either Tomori, Gomez or Keane, and Ben Chilwell in defence, with Jordan Pickford in between the sticks.

With all this in mind, here’s how we think England should be lining up to take on Czech Republic in Prague tonight… 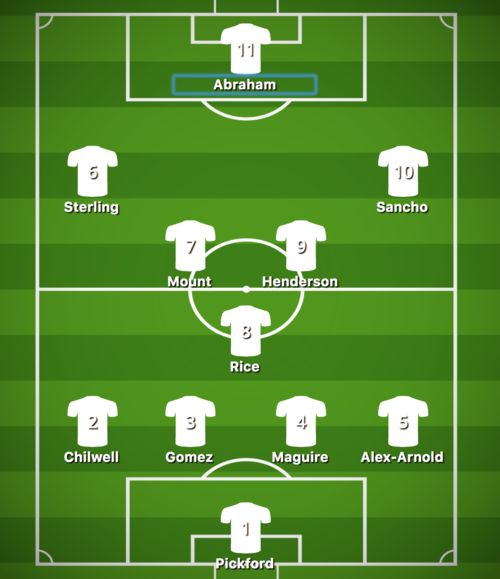