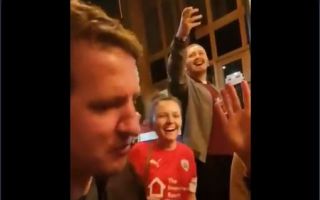 It’s always a shame when somebody gets sacked after a brilliant promotion campaign. They should really get the chance to try and work things out, but owners can get increasingly jumpy when faces with relegation.

Daniel Stendel was sacked by Barnsley earlier in the weak after a tough start to life in The Championship. They club have traditionally been a yo-yo team between the Championship and League 1 so it shouldn’t come as a huge surprise to see them struggling.

Clearly the fans still hold him in high regard after they held some leaving drinks which Stendel attended:

Barnsley manager Daniel Stendel showed up to have a farewell drink with fans last night, before he headed back to Germany, after being sacked by the club. ? (?@_rosabroom) pic.twitter.com/BMZf89WrcE

There’s only one Daniel Stendel ?
Never seen a manager care so much for the fans #BarnsleyFC pic.twitter.com/75iyF8k1sw

It’s especially heartwarming to see how much the fans are looking on with adoring faces, it’s a shame to see him go but nice to see the fans still have so much respect for him.