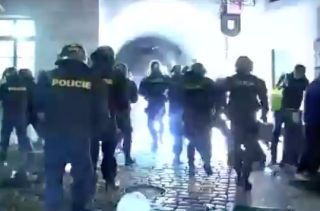 Video footage has emerged showing some England fans clash with Czech police in Prague ahead of their Euro 2020 qualifier against the Czech Republic.

As noted by the Mirror, things turned slightly ugly on Friday night as riot police were called in with England fans gathering outside bars in the city’s Old Town Square.

SEE MORE: Confirmed England XI vs Czech Republic: Full debut for Chelsea ace, but these fans not happy with Southgate

Further, it’s noted that stun grenades were used and that round 10 supporters were arrested, with the video below showing some part of the clashes.

“It started when one or two fans threw bottles at the police,” said one eyewitness, as per the Mirror. “They landed near the police vans and at first they ignored it. But then one bottle hit the meshed window of a police van, and that was the trigger for them to act.

“The England fans then threw three or four bottles, and the cops moved in with batons drawn as they set off the two stun grenades to disperse the crowds. Then the men involved were arrested and held down on the ground before they were taken away.”

It’s hoped that there are no further incidents during or after the game on Friday, as ultimately the focus should be on Gareth Southgate and his players getting a positive result to continue their impressive qualifying campaign.

Ahead of kickoff, England sit top of Group A with maximum points, but a win for the Czechs would move them level at the top of the standings.

In turn, it promises to be a crucial clash, one that hopefully isn’t overshadowed by incidents and clashes off the pitch.