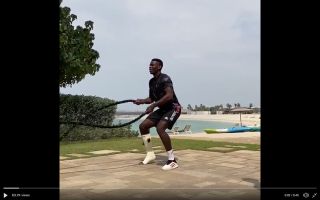 Manchester United superstar Paul Pogba has posted a fitness update to his Instagram page, the midfielder seems to be working towards a return for the Liverpool game.

Manchester United fans will be hoping that superstar midfielder Paul Pogba can use the international break to recover from injury and get back to full fitness ahead of United’s mammoth clash with rivals Liverpool.

According to L’Equipe via the Daily Mail, Pogba is recovering from a ‘cracked toe’, which doesn’t require him to undergo surgery, United are keen for the ace to take a ‘natural’ route back to full fitness.

The 26-year-old has been in Dubai to work on his fitness during the international break. According to the Daily Mail, the superstar has been training at the state-of-the-art Transform Altitude Performance Centre.

Pogba was seen using battle ropes in order to strengthen himself as he embarks on his journey to get back out onto the pitch.

Ig Pogba: "Almost there ? show off or motivation ? you choose ? Same result at the end anyway ???????#enjoyworking" [paulpogba] pic.twitter.com/worDt6jv4b

Pogba has made six appearance for the Red Devils across all competitions, like many of his teammates he isn’t in the best of form – but his return to action will undoubtedly give the entire squad a boost ahead of a crucial match.

Ole Gunnar Solskjaer will need the help of every player he can get his hands on for United’s mammoth clash with rivals Liverpool.

The Red Devils have been in poor form and need to avoid being embarrassed by their heated rivals next weekend.