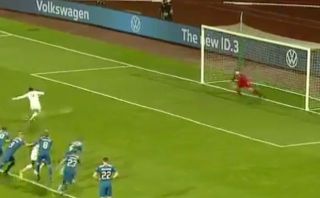 Olivier Giroud made no mistake from the penalty spot as he secured all three points for France on their trip to Iceland on Friday night.

Les Bleus are locked level with Turkey in top spot in Group H in Euro 2020 qualifying, and so a win on Friday was crucial in what was a difficult fixture.

They had to wait until the 66th minute to find a breakthrough, and it came from the penalty spot after Antoine Griezmann was brought down in the box.

Chelsea ace Giroud stepped up, and he made no mistake as seen in the video below, as he showed great composure and technique to send the goalkeeper the wrong way and comfortably convert.

That ultimately turned out to be the only goal of the game, and so France will be delighted to pick up all three points as they now face a showdown with Turkey at home on Monday night in what could be a decisive encounter.

It wasn’t all good news from a Chelsea perspective though, as N’Golo Kante was a late withdrawal after picking up an injury in the warm up. Time will tell whether or not it’s serious enough to force him to miss playing time on his return to west London.