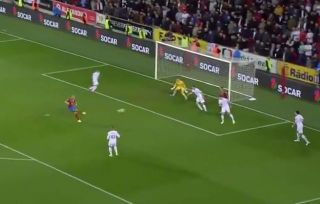 Zdenek Ondrasek was the hero for Czech Republic on Friday night as he scored the winning goal in a 2-1 victory over England in Prague.

The visitors took the lead after just five minutes through Harry Kane, but they were pegged back after some slack defending from a corner.

SEE MORE: ‘Comedy of errors’ – Maguire among trio singled out for criticism from ex-England star

The defensive frailties remained on show thereafter too as Jordan Pickford’s attempts to play out from the back resulted in possession being given away, and Czech Republic made the most of their opportunity.

As seen in the video below, Ondrasek was unmarked in the box and on hand to find a second goal for the hosts, as they secured a huge upset given England’s form going into this encounter.

A win would have secured qualification for Euro 2020 for Gareth Southgate’s men, but instead their rivals now sit joint top of Group A, albeit they’ve played an additional game compared to England.

It’s a big blow for the Three Lions though, and they’ll hope to react next week and get back to winning ways to put a bitterly disappointing night behind them…