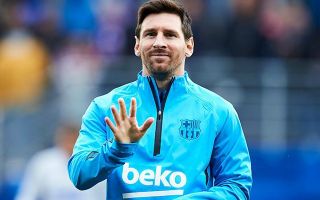 The Argentine international has spent his entire career at Camp Nou so far, netting 604 goals and providing 244 assists in 693 appearances across all competitions.

SEE MORE: ‘I’m happy here’ and ‘I came to win’ – Barcelona ace shuts down exit talk and insists he wants to stay

It’s no secret that the 32-year-old is Barcelona’s most important player and the Blaugrana will be eager to tie him down to a new contract. If they do offer Messi a lifelong contract, the Argentine may even agree to sign it given his love for the club.

This season, the Blaugrana skipper has so far featured in five matches for them, scoring a goal and providing two assists. After the international break ends, Barcelona take on Eibar on the 19th and Messi will be eager to guide his team to three points.