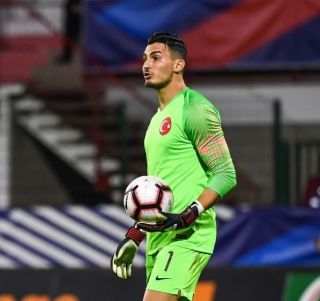 Newcastle United could reportedly rival the likes of Arsenal, Liverpool and Tottenham for the signing of Trabzonspor shot-stopper Ugurcan Cakir.

The 23-year-old has seemingly made a big impression thus far despite having made 47 appearances for the Turkish outfit, conceding 60 goals in that time and keeping just nine clean sheets.

However, according to The Sun, he is said to have a £17m price-tag and Newcastle could now look to beat Arsenal, Liverpool and Spurs to his signature having sent scouts to watch him in action.

To have such calibre of clubs showing reported interest says a lot in itself about the quality and potential that Cakir has, as it surely is more than coincidence that top Premier League sides are looking to swoop for him.

Of the sides named above though, it’s questionable whether or not Liverpool need to splash out such a hefty fee on another goalkeeper given Alisson’s presence in the squad, while Adrian has deputised well for him during his injury lay-off.

In contrast, with little established competition behind Bernd Leno at Arsenal and with Hugo Lloris suffering a serious injury last weekend coupled with his habit of making mistakes at times, Tottenham could also be a genuine destination for Cakir in the future.

As for Newcastle, Martin Dubravka is said to be closing in on signing a new contract with the Magpies, as per The Chronicle, and so Cakir may not be first-choice on Tyneside if he were to choose that option.

Time will tell what his priority is if he chooses to leave Trabzonspor, but ultimately it looks as though he could have a tough time to immediately break into the starting line-up in any of the sides said to be monitoring him with a view of making a potential swoop in the future.