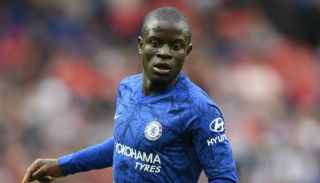 Chelsea have been handed some good news regarding key midfielder N’Golo Kante, after France boss Didier Deschamps confirmed that the Blues star didn’t play for Les Bleus last night as a precaution.

Kante was included in France’s squad for their qualifiers against Iceland and Turkey this month, however the Chelsea man was nowhere to be seen last night as Deschamps’ side beat Iceland 1-0 away from home.

The Chelsea man was chosen to start against Iceland, however he was pulled from France’s starting XI just before kick-off, being replaced by Moussa Sissoko in the process.

Following this, Chelsea fans would’ve been fearing the worse, especially seeing as the midfielder has struggled with injuries so far this season.

However, following confirmation from Deschamps himself, it seems like Kante was only removed from France’s starting XI as a precaution, with the injury itself not being a serious one.

As per the Mirror, when speaking about Kante after the match, Deschamps confirmed “He felt a pain in the adductor muscle. He had a feeling where he did not feel comfortable to play.I made the decision [to pull him from the squad], because maybe it could get even worse.”

Deschamps then added “I do not think it’s too serious”, words that’ll surely come as huge relief for Chelsea and all of their fans.

Kante has only made six appearances for the Blues in all competitions this season, something that can be attributed down to the amount of injuries he’s suffered.

Due to this, we’re sure Chelsea fans would’ve been fearing the worst last night following the news about Kante, however now, it seems like they can rest easy.