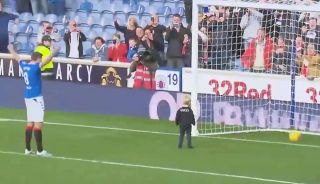 Liverpool Legends ran out 3-2 winners against Rangers Legends at Ibrox on Saturday afternoon, but there was a brilliant moment after the game.

Steven Gerrard rolled back the years as he looked brilliant in the first half as he featured for Liverpool, while he was re-introduced into the game late on for Rangers.

However, the current Rangers boss saw his thunder stolen by his son, as seen in the video below, as he scored in front of the home faithful and lapped up the applause after.

It was a wonderful moment and one that few will get bored of watching, as it was seemingly a memorable day for Gerrard for many reasons as he got to put the Liverpool shirt on again while also enjoying this lovely moment with his kid.

Based on his performance in the opening 45 minutes though, there could even be calls for him to get the boots back on as he was instrumental in goals for Emile Heskey and Luis Garcia, showing great fitness and quality to lead the Liverpool counter-attack with real urgency and intensity.

It will be back to the day job soon enough though, but not after a brilliant day for all concerned it seems.

? What you all wanted, a Gerrard goal in front of the Copland. pic.twitter.com/BR6tv2o6S0