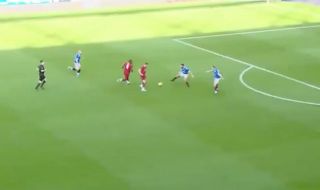 A Liverpool Legends side was in action against Rangers on Saturday, and Steven Gerrard looks like he could be still playing at a high level.

The Rangers boss was back in the Reds shirt this weekend for the opening 45 minutes before switching side, and he wasted no time in showing that he was probably one of the most in-shape and in-form players on the pitch.

As seen in the videos below, Gerrard showed he can still make great runs over some distance as he led Liverpool on the counter attack, and while he helped himself to an assist, he was also instrumental in the build-up to their second.

However, it was the assist for Emile Heskey which caught the eye in particular, as he played a reverse ball superbly to trick the defence and allow his former teammate to nestle one into the back of the net.

With five goals in the opening 28 minutes, it probably says a lot about the standard and fitness levels from those involved, but it was pretty clear very early on that Gerrard was the man to run the show in midfield for Liverpool.

? GOAL: Patrik Berger scores a second for @LFC after a quick counter-attack led by Gerrard. Not the best of starts from the Gers! 0-2 pic.twitter.com/IMESTNFv9B

Opinion: Liverpool can’t make the same mistake with Steven Gerrard as Chelsea did with Frank Lampard