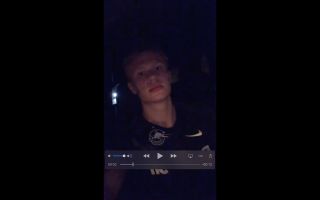 19-year-old wonderkid Erling Haaland likes to sing along to the UEFA Champions League anthem while he’s driving, the tune has certainly worked in getting the ace pumped up.

Red Bull Salzburg star Erling Haaland uploaded a video of himself singing along to the Champions League anthem to his Instagram story yesterday night.

It seems to be the striker’s go to tune while he’s driving.

Calciomercato report that Premier League giants Manchester United and Liverpool are set to battle for the ace’s signature next year.

Spanish outlet Don Balon also claim that La Liga giants Barcelona and Real Madrid have been keeping a close eye on the ace.

The forward will definitely be snapped up by one of the European powerhouses if his prolific form continues.

Take a look a the ace signing along to the anthem of the most illustrious club competition below:

Erling Haaland’s Instagram story shows him driving at night while listening to the Champions League anthem. from soccer

Haaland’s teammate, Max Wober revealed the striker’s favourite tune after his stunning hat-trick on his Champions League debut at the start of the season:

"Erling is crazy. Last night our captain was walking with his daughter. Then a car stopped. Erling was inside. He rolled down the window. And there he was, listening to the Champions League anthem." pic.twitter.com/3LmoYK8yFg

The 19-year-old forward has been prolific this season, the ace has scored a staggering 18 goals in just 11 appearances across all competitions this season.

Erling, son of former Manchester City player Alf-Inge, has also won two senior caps for Norway’s side and he looks to be an integral player for the country’s future.