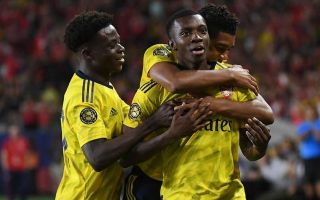 The 20-year-old striker impressed for the Gunners in their pre-season matches before joining Leeds United on loan. So far, Nketiah has featured in eight matches for Marcelo Bielsa’s side, scoring four goals and providing an assist. Only two of his eight appearances this season have been starts with both of them coming in the EFL Cup.

SEE MORE: Arsenal star could link up with old Gunners team-mate as Serie A giants on alert for transfer

According to the Sun, Bristol City are interested in Nketiah and will try to sign him in January. The report also claims that the Robins’ manager Lee Johnson was keen on bringing him to the club during the summer.

Bristol City are currently 6th in the Championship table with 20 points, just two points behind leaders West Bromwich Albion. They have a strong chance of being in the Premier League next season which would be their presence in the top-flight for the first time since the 1978/79 season.

Nketiah has done well in the opportunities that he has received under Bielsa and there’s a good chance he’ll get more first-team opportunities provided Bristol City managed to sign him.