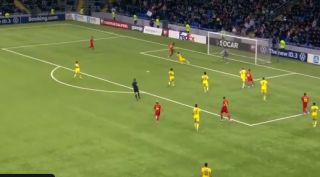 Chelsea striker Michy Batshuayi has scored an emphatic goal for Belgium against Kazakhstan today to remind manager Frank Lampard what he can do.

The Blues ace has not seen a great deal of action at Stamford Bridge so far this season, but remains a quality player who could surely have more of a role to play this season.

Despite his struggles in recent times, Batshuayi remains a clinical finisher at the highest level and showed great composure and ability to smash the ball home from close range in the video clip above.

It’ll probably take more than this to get in to Lampard’s team ahead of in-form youngster Tammy Abraham, but he’s certainly done his chances no harm with this well-taken goal.