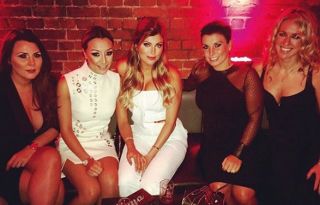 Coleen Rooney was reportedly partying and letting her hair down in a £420 leather dress amid her row with Rebekah Vardy.

The WAG of former Manchester United and England captain Wayne Rooney outed Rebekah as leaking her private Instagram stories to the press in a recent tweet that broke the internet last week.

Since then, however, it seems Coleen is in good spirits and living life to its fullest, according to quotes from sources to the Sun.

“She was the life and soul of the party and really let her hair down,” one said.

“Coleen didn’t seem to have a care in the world.”

Meanwhile, a friend of hers explained how long the Vardy situation has been bothering her.

“She has told people that she suspected Becky was the mole four years ago — and it’s been weighing heavily on her mind all this time,” Coleen’s friend said.

“The nagging feeling that Becky has been betraying her confidence has been eating away at Coleen for those four years.

“Obviously she feels like it’s been a huge betrayal. She hopes this now puts an end to all the lies and deceit.

“She won’t speak out about this again — and certainly won’t be appearing on any TV shows or doing any magazine deals.”