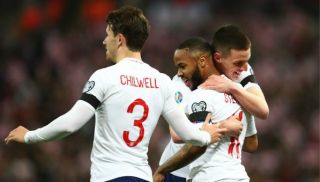 The highly-rated young England international has shone in the Premier League and has long been tipped to make the move up to a bigger club.

According to the Daily Mirror, Rice now seems to be on United’s radar ahead of January in a potential £70million deal as they keep a close eye on the 20-year-old.

That’s a lot of money to pay for one so young, however, and there have also been one or two concerns about Rice in recent times despite an excellent breakthrough season last year.

Declan Rice is being linked with a transfer to Manchester United

It seems many Man Utd fans are not convinced by the youngster and Gary Neville has also previously been quoted as suggesting he might not be worth the money required to lure him away from West Ham.

“I don’t know. I mean you talk about £80m, £90m to get him out of West Ham.” Neville was quoted by the Manchester Evening News.

“We’ve seen a bid for (Wilfried) Zaha go to Everton this year for £70m. To get players out of the likes of West Ham now, Crystal Palace, it is not going to be easy. It is going to cost a fortune.

Declan Rice should not be on United's radar. 60 million for a British passport when there's 20 other lads around the same age better than him across Europe. Just lazy scouting as per from United

Declan Rice to Utd ? No please

Correct Rice is good professional but hyped up by the English media because there isn't many cdm's around that are English and any good. He's a tidy average player, he will get his move eventually via media pushing it, Utd and Woodpecker on alert ??? https://t.co/IVhsdX5tTs

Am I missing something with Declan Rice? Whenever I see him play he's bang average. Plays the safe pass all the time. There were rumours we're willing to pay 100 million for him. I wouldnt pay 100 pound for him. No thanks. #CZEENG #England #MUFC

Anyone thinking Declan rice is a solution to united problems is gravely mistaken. He may be good in the future but currently nowhere near good enough for what we need. #mufc