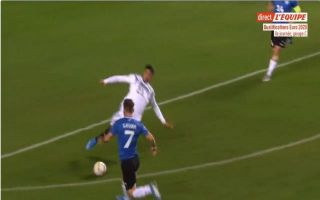 It’s not been a great season for Emre Can so far, he’s out of favour at Juventus so playing for Germany seems to his best chance of playing just now.

He will now be suspended for at least one game for his country after receiving a straight red card tonight vs Estonia. It’s not totally clear if he’s at fault for letting the ball run across his body or if it’s a poor pass, but he cant lunge in like this. It’s starting to look like he should’ve stayed with Liverpool.

He’s put himself in a position where any sort of foul is going to be a red card:

The sending off also leaves Germany open to a potential shock result with Estonia having home advantage and now a man advantage for most of the game.

Germany have had some struggles recently so a loss here could result in some panic ahead of Euro 2020.