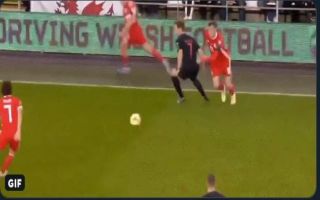 It’s always fun to watch someone with a variety of step overs and flicks and tricks, but sometimes a fairly simple piece of skill can be the most effective.

The prime example would be Cristiano Ronaldo when he first arrived at United, he resembled someone pressing random buttons on Fifa and would often trick himself as well as his opponent.

There was a mini Real Madrid vs Barcelona match up as Gareth Bale faced off against Ivan Rakitic tonight, and this classy touch left Rakitic looking like a fool:

It may or may not be a nutmeg, but there’s no doubt that it left the Barca man for dead as Bale strode away from him.