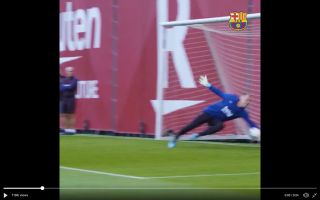 Barcelona star Marc-Andre Ter Stegen amazed some fans by making this stunning save to deny Gerard Pique in Barcelona training, who is the best GK in the world?

Barcelona superstar Gerard Pique was left stunned when his powerful header was saved by Marc-Andre Ter Stegen during the a Blaugrana training session.

The clip of the stunning stop was shared on Barcelona’s official account earlier today, the footage is actually from last week – just before Ter Stegen joined up with the Germany squad.

Take a look at the Germany international’s exceptional save below:

Piqué with the header, and goa – wait what?! ? pic.twitter.com/384MNsUngy

Here’s how some football fans reacted to the 27-year-old’s amazing reflexes:

The best gk in the world

The great wall of Barcelona

Barcelona have an absolute wall in between the sticks for the foreseeable future, Ter Stegen has to be one of the top 3 goalkeepers in the world.