As you’ll no doubt have seen by now, Danny Mills has caused a bit of a stir on Sky Sports by naming a Liverpool and Manchester United combined XI that’s just…the Liverpool XI.

See below as the player-turned-pundit snubbed Man Utd players in every position, including some expensive signings in Paul Pogba and Harry Maguire, who truly haven’t looked good value for money for the Red Devils. 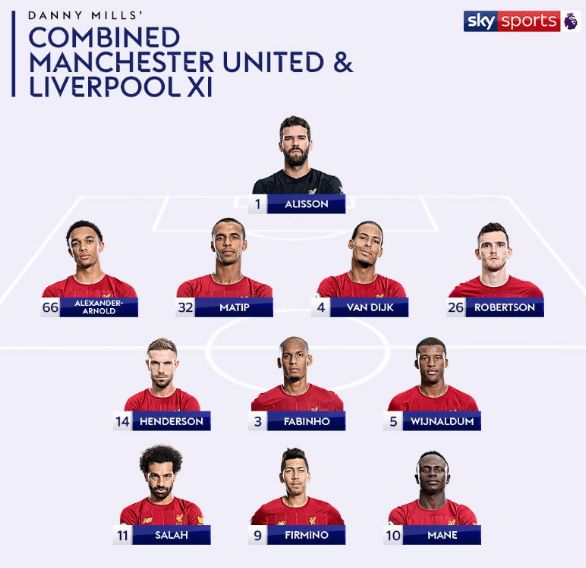 And on that note, we thought we’d go through each position and compare what United player each Liverpool star would be up against in terms of what each club paid for their transfer fee.

The results are quite staggering…

Liverpool really splashed out for their Brazilian goalkeeper (fee via BBC Sport), and given that De Gea joined United all the way back in 2011, it’s not surprising to see he moved for considerably less (fee via BBC Sport), though that fee was seen as quite a lot at the time for a young and inexperienced shot-stopper.

There’s not a lot in this in terms of price, but there’s no doubt that Van Dijk (fee via BBC Sport) looks by far the better piece of business after his immense displays and transformation of Liverpool’s defence, whereas Maguire (fee via BBC Sport) has so far gone backwards since joining MUFC.

It took some time for Joel Matip to get going for Liverpool, but what an important player the free transfer from Schalke has become, whereas £31m Victor Lindelof (fee via BBC Sport) continues to struggle for consistency despite some signs of promise.

Aaron Wan-Bissaka looks a fine young full-back, but the price difference between these two is ridiculous, with Trent Alexander-Arnold obviously costing Liverpool nothing after coming through their academy and becoming a world class performer for the club, whereas United had to fork out £50m for Wan-Bissaka (fee via BBC Sport) – a fee yet to look like terrific value, despite the player’s qualities and potential.

Some more astute work in the transfer market here as Liverpool can justifiably argue they got one of the very best left-backs in Europe for just £8m (fee via BBC Sport), whereas Man Utd splashed out £27m (fee via BBC Sport) on the injury-prone and inconsistent Luke Shaw and are yet to see a return on that investment.

Two no-thrills midfield players who do fine jobs for their clubs, though in this case Liverpool spent more as Scott McTominay came through United’s academy. Still, £20m for Henderson back in 2011 (fee via BBC Sport) now looks very decent business by the Reds.

Two midfielders who again moved in the same summer, Paul Pogba cost a lot more (fee via BBC Sport) and generated a lot more hype upon his arrival than Georginio Wijnaldum did when he joined Liverpool in a low-key £25m move (fee via BBC Sport). It’s fair to say Pogba has been a big disappointment for his club, whereas Wijnaldum has taken his game to another level and been a big-game player for his.

Another rare example of Liverpool paying more than United for a player, but in this case a £34m deal for Mohamed Salah (fee via BBC Sport) looks exceptional business after his huge improvement to become one of the best players in the world under Jurgen Klopp. Daniel James, however, for £15m (fee via BBC Sport) also looks a bit of a steal and Red Devils fans will hope for more smart signings like this.

It’s fair to say both of these perhaps looked a little over-priced at the time, though Mane (fee via BBC Sport) has ended up being an absolute bargain after developing into a genuinely world class attacker, whereas Martial (fee via BBC Sport) started brightly before fading and now looks to be running out of time to save his Old Trafford career.

Finally, United win the bargain battle here as Marcus Rashford rose for free from their academy, though you’d have to say once again that LFC did outstanding work to get a talent like Roberto Firmino for £29m (fee via BBC Sport) and they wouldn’t swap him for anybody.

Liverpool – £330.8m – an expensive team, but that’s mainly bumped up by Alisson and Van Dijk’s fees, with mostly very astute purchases and excellent freebies in Alexander-Arnold and Matip making up this dominant Reds side.

Man Utd – £393.9m – costing £63.1m more than the Liverpool XI, it’s pretty damning to see how much United have blown on players who just haven’t delivered, and this doesn’t even take into account the money they wasted on the likes of Romelu Lukaku, Angel Di Maria, Memphis Depay, Morgan Schneiderlin and other recent signings who’ve already been moved on, or, for that matter, costly purchases like Eric Bailly, Juan Mata and Nemanja Matic who now wouldn’t get into this XI.