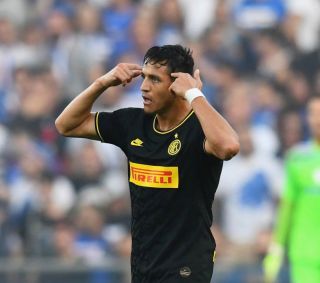 Alexis Sanchez has had an international break to forget as the Man Utd loanee and current Inter ace faces a possible three-month spell on the sidelines.

As noted by BBC Sport, the 30-year-old joined the Italian giants on a season-long loan deal in a bid to get regular playing time and to rediscover his best form.

That plan has gone fairly well for him so far with a goal and an assist in four outings for the Nerazzurri, but there is now concern over an injury he has suffered while with Chile over the international break.

As noted by Sport Mediaset, Chile coach Reinaldo Rueda has now conceded that if Inter believe that the injury sustained to Sanchez’s ankle requires surgery, it could mean he sits out for up to three months to make a full recovery.

“He took a heavy blow to the ankle,” he is quoted as saying in the report above. “At this point it will be up to Inter to decide what to do. If he were to operate, he would be out for two or three months. It’s a shame, he was returning to play in his club, he scored two goals and played in the Champions League.”

It’s added by Sport Mediaset that Inter effectively have two choices at this stage, one is to adopt conservative treatment and allow the issue to heal over time, or to undergo an operation which in turn will sideline Sanchez for between two and three months.

It’s unclear if Man Utd will have any involvement in the decision as they evidently want to protect their asset as he’s merely on loan at Inter and such an injury could be disastrous for his hopes of staying on until the end of the season if they have an option to call him back for treatment in England.

Time will tell how the situation plays out, but Sanchez will undoubtedly be bitterly disappointed that he now faces a spell out of action either way, while Man Utd will hope that he can still get significant minutes under his belt in the second half of the campaign.