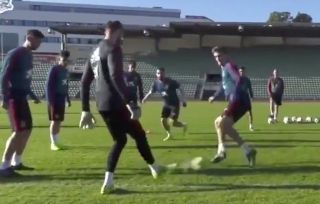 Given Man Utd’s troubles in the final third so far this season, it might be worth giving David De Gea a look in given these skills on the ball.

The Red Devils have managed to score just nine goals in eight Premier League games so far this season, giving them the second-worst tally of the top 12 sides in the standings.

SEE MORE: Major concern for Man Utd loanee as operation on injury could sideline him for three months

That has undoubtedly been a major problem for Ole Gunnar Solskjaer and a key reason as to why they’re down in 12th place, with four of those goals coming in their opening game of the season.

In turn, the United boss will be looking for solutions moving forward and De Gea has been busy enjoying himself with Spain this week and was keen to show off his classy ability on the ball.

As seen in the video below, he pulled off two nutmegs during an exercise in their training session, and he had to take a moment after to really enjoy it and soak it in.

The Spanish shot-stopper is one of the best in his position in Europe, but with these skills, he’s certainly shown that there’s more to him than what he offers between the posts.