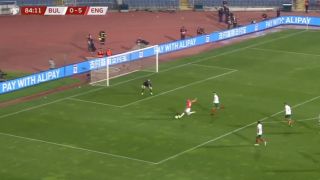 Harry Kane finally managed to get his name on the scoresheet for England tonight, after he scored a late goal against Bulgaria in Sofia.

With the Three Lions already 5-0 up going into the last few minutes of the match, Kane finally found the back of the net in a match that had already seen him squander a number of good chances.

There we go… wouldn't be a 6-0 thrashing without a Harry Kane goal. He tucks away a near-post finish

After picking up the loose ball 30 yards from goal, Kane took on two Bulgaria players with ease, nutmegging one of them, before firing home with his weaker left foot.

A deserved goal from the Spurs talisman on a dominant night for England!