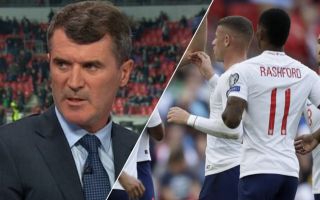 Roy Keane was made to look foolish tonight by Ross Barkley, as the midfielder scored a brace after Keane claimed he wouldn’t start the Chelsea man.

Barkley bagged a brace in the first half, as well as an assist, as he helped guide England into a 3-0 lead within the first 33 minutes.

Roy Keane on where to play Ross Barkley ?? pic.twitter.com/LA6RPUI1jp

This, in turn, has left Keane with egg on his face, after the Man United legend claimed before the match that he’d start Barkley “on the bench” after being asked where he’d play the Blues man.