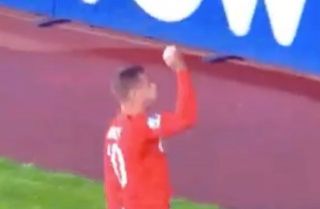 England were in full control against Bulgaria on Monday night, but racist abuse from the stands sadly overshadowed matters on the pitch.

The game was stopped twice in Sofia in the first half as abuse and chants could be heard with Gareth Southgate in conversation with both his staff and UEFA officials.

SEE MORE: “Should be banned from international football” – Loads of fans want UEFA to act on racist chants from Bulgaria fans during England clash

With the risk of the game being abandoned, it remains to be seen what further action is taken by the governing body as the chants were sadly expected prior to the game, although some eagled-eyed viewers think they spotted Ross Barkley give his opinion on the section of Bulgaria fans in question.

As seen in the video below, the England international was celebrating as he helped himself to a double in the opening 45 minutes, and his celebration appeared to include a sneaky gesture to the home crowd.

Or that’s at least what those tweeting below thought, as they all spotted the same thing and suggested that Barkley had made a gesture, which could in fact land him in hot water if it’s something that UEFA are inclined to take action against.

Sneaky wanker sign from Barkley after his second goal tonight, in direction of the section of racist Bulgarian’s in the ground ? pic.twitter.com/V4uUBundLc

Ross Barkley with the slyyyy ‘wanker’ sign for the racist fans ??? pic.twitter.com/Hm5JI6TOrM

Absolutely HUGE fan of Ross Barkley sneaking the ol’ wanker sign into his celebration to the Bulgaria fans. Incredible shithousery against racism. pic.twitter.com/mRU3Q8B90i