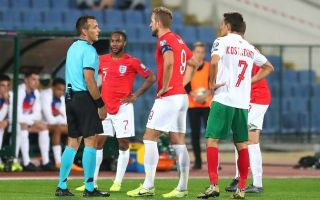 Bulgarian Prime Minister Boyko Borissov has urged the president of the country’s football union to resign following the disgraceful scenes in last night’s match in Sofia.

England beat Bulgaria 6-0 against a backdrop of racist chanting from a section of the home crowd and even some grotesque Nazi salutes from a few supporters.

The game had to be paused at points as the abuse towards England’s players got so bad, but it’s unclear what action UEFA will be taking to properly tackle these issues.

From Bulgaria’s end, it seems there is at least some recognition that the behaviour of some of their fans was unacceptable, even if some initial local media reaction last night suggested a denial of the problem.

As reported by Sky Sports, Borissov is now calling on BFU chief Borislav Mihaylov to step down from his position, threatening action against the Bulgarian football set-up if he stays in the job.

? a good move credits to you M. Borissov https://t.co/28dikRPhTE

“The prime minister called me urgently a short time ago,” Krasen Kralev said. “You know that the government has done a lot for the development of Bulgarian football in the last four years.

“But after the recent events, having in mind the whole state of football and last night’s incidents, the prime minister has ordered me from today to suspend any relations with the BFU, including financial ones, until the resignation of Borislav Mihaylov.”

As seen in the tweet above, England star Raheem Sterling has applauded this move.