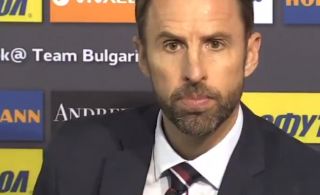 The Three Lions put in a heroic performance to win 6-0 in difficult circumstances as some ugly scenes saw racist chanting and Nazi salutes from some sections of the home crowd.

This led to the game being stopped as it got so bad at points,  but in the video above this Bulgarian journalist hits out at England’s complaints.

Almost as bad as the racism itself is this kind of denial from the Bulgarian media, as well as from their manager who claimed not to hear anything.

“I was concentrating on the game, I didn’t hear anything,” manager Krasimir Balakov was quoted by Sky Sports. “I just talked to the English press, and I told them that if this is proven to be true then we have to be ashamed and apologise for it.

“Spurs are going nowhere” – Kane transfer to Chelsea could be on as he’s fed up with Mourinho, says Blues legend

“But once again, first it has to be proven to be true. If our captain spoke to the fans, it was probably because of the way the team was performing, and the whole topic in the build-up to the game.

“The fans are emotional, you obviously want me to say this and I have to say it, if something happened, I’m sure it was a small group of people who were really were out of their minds because it was unacceptable, if it happened of course.”