The top 20 candidates for this year’s Golden Boy prize have been revealed, with plenty of names who’ll be of interest to Premier League clubs.

Firstly, some youngsters from the English top flight make it in as Arsenal’s Matteo Guendouzi, Chelsea’s Mason Mount, Manchester City’s Phil Foden and Everton’s Moise Kean are among those in contention for the prize.

You can see a screen grab of the shortlist below, as also reported by the Independent and others. 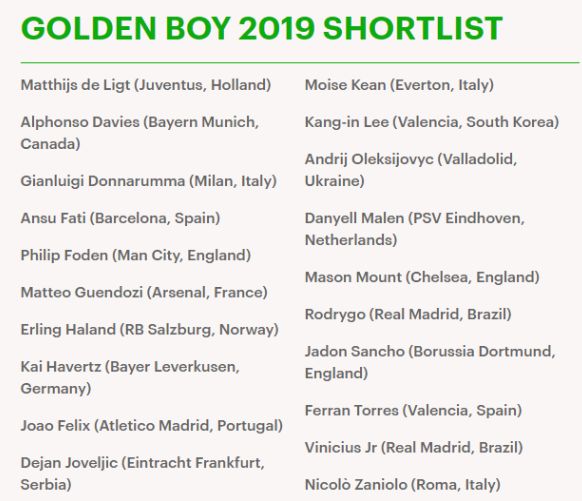 The likes of Sancho and Havertz have notably been linked with Premier League clubs in recent times, so their inclusion could serve them well to show top teams just how highly they’re rated right now.

Havertz has been linked with Liverpool and others by the Express and looks a superb all-round talent who could have a big career ahead of him, especially if he were to choose to continue his development under the expert guidance of fellow countryman Jurgen Klopp.

Sancho, meanwhile, has been repeatedly linked with Man Utd by Goal and others, and looks an ideal long-term solution to their attacking problems.

Arsenal and Chelsea fans will no doubt be rooting for exciting talents Guendouzi and Mount, though they certainly seem outsiders for the prize given the quality of the competition.