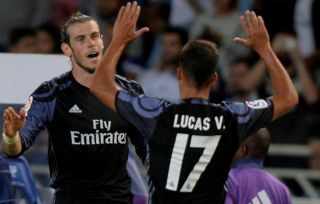 Real Madrid have been dealt a blow ahead of their clashes against Mallorca and Galatasaray in the coming days, as Lucas Vazquez has picked up an injury.

Vazquez has played eight times in all competitions for Los Blancos so far this year, with Zinedine Zidane opting to go with the Spaniard over other attackers this term.

However, it doesn’t seem like the Frenchman is going to be able to play against Mallorca this weekend according to journalist Jose Luis Sanchez.

As per Sanchez, Vazquez will not be available for this weekend’s clash against Mallorca in La Liga, whilst the winger is also a ‘serious doubt’ to play against Galatasaray in the Champions League next week.

Given that Vazquez seems to be one of Zidane’s most favoured personnel, this news will certainly not be music to the Frenchman’s ears.

This injury shouldn’t hamper Zidane’s selection choices too much, as he should still have the likes of Gareth Bale, Eden Hazard and Karim Benzema to choose from in attack.

Real will be looking to come away from their clash against Mallorca on Saturday with all three points in order to ensure that they keep their place atop of La Liga ahead of their El Clasico match against Barcelona next week.

However, following this news, it looks like Real are going to have to try and do with without the help of Vazquez after the Spaniard’s recent injury trouble.