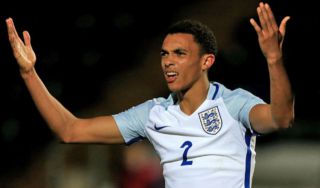 Liverpool defender Trent Alexander-Arnold has criticised Bulgaria’s manager after he stated that he couldn’t hear any of the racist chants aimed at England’s players during yesterday’s Euro 2020 qualifier.

Southgate’s side hammered Bulgaria 6-0 in Sofia yesterday, however the result was overshadowed by a number of racist chants from the home supporters that were aimed at England’s players.

During the match, the referee was forced to stop the game on multiple occasions due to England complaining about racist chants and abuse being hurled at a number of their players, and it was surprising to see the match avoid being called off.

Following this, Bulgaria’s boss Krasimir Balakov came out and claimed that he couldn’t hear any of the racist chanting as per the BBC, which comes despite one of Bulgaria’s players even asking their fans to stop with the racism during half time.

This claim from Balakov urged Alexander-Arnold to come out on Twitter and criticise the Bulgarian boss, asking whether he was “for real”.

Is this guy for real? The way the team stuck together last night was unreal but we can't ignore what happened. The racism has gotta stop. https://t.co/9HMTgG5wrp

The scenes on display last night were nothing short of disgusting, and it’ll definitely be interesting to see what UEFA do about the racist chants that were on display.

It may just be him defending his side’s fans, however for Balakov to come out and say this despite the match being stopped on more than one occasion for racist chanting is nothing short of ridiculous.