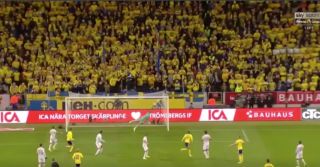 David De Gea clearly brought his a-game to Spain’s Euro 2020 qualifier against Sweden tonight if this save is anything to go off.

The Man United shot-stopper, who’s been suspect for the Red Devils so far this year, pulled off a brilliant, acrobatic stop to keep Sweden at bay during tonight’s Euro qualifier.

David de Gea pulls off a stunning save to keep out Robin Quaison's header.

After a cross into the box met the head of Quaison, who thundered his attempt at goal, however De Gea was equal to it, as he palmed the attempt over for a corner.

If only he could play like that for Man United!