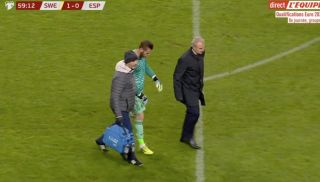 Man United have been dealt a potentially huge blow ahead of their clash vs Liverpool this weekend, after ‘keeper David De Gea seemed to pick up an injury during Spain’s clash vs Sweden.

The United shot-stopper had put in a brilliant performance for La Roja up until the hour mark, however that was sadly when De Gea was forced off through a suspected injury.

David de Gea has been subbed off after appearing to tweak something whilst
clearing the ball.

After kicking the ball high up the pitch, De Gea fell to the floor in pain, with the Spaniard then being immediately replaced by Chelsea ‘keeper Kepa.

If you’re a Man United fan, you definitely hate to see it…

Pictures via L’Equipe and Sky Sports