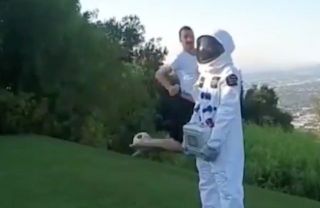 LA Galaxy superstar Zlatan Ibrahimovic has been busy delighting us with some skills on Instagram in recent times and he has a new offering.

The 38-year-old is fresh from seeing a statue put up of him in Malmo as he continues what has been a glittering career for both club and country.

However, not content with just delivering entertainment on the pitch, he has been posting some of his favourite skills while at home on Instagram.

As seen in the video below, his latest is perhaps a more simple offering than we’re used to, but he somehow manages to involve a spacesuit and delivered what can only be described as a Zlatan kind of caption.

Unlike his ‘matrix trick’ last time out, he hasn’t challenged anyone to follow suit, but it appears as though Ibrahimovic is keeping himself busy away from the training ground with some entertaining and intriguing ways to show off his skills and unsurprisingly as like many things he does, it has gone viral.

Zlatan shows us how it's done ?