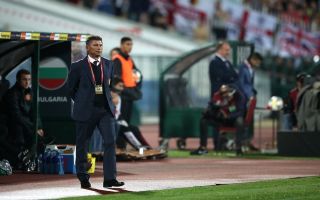 Bulgaria manager, Krasimir Balakov has issued a statement that condemns the racist abuse that England’s players suffered during their 6-0 win on Monday night.

According to Sky Sports News, Krasimir Balakov stated in a statement issued on Facebook that “this prejudice should be buried deep in our past” in response to the racial abuse that England players were subjected to in their win vs Bulgaria.

Balakov sparked further controversy when he claimed not to have heard any of the abuse during the match. With the shocking abuse apparent to viewers across the world, some fans found this hard to believe.

As per Sky News, the Bulgarian Football Union has been charged with four offences following the match:

“Racist behaviour including chants and Nazi salutes; the throwing of objects; disruption of the national anthem; and replays on a giant screen.”

Liverpool’s Trent Alexander-Arnold hit out at Balakov on social media after he claimed to have not heard any of the abuse.

England debutant Tyron Mings told the assistant referee “Did you hear that” after being subjected to vile racial abuse:

Tyrone Mings asks the fourth official ‘Hey, did you hear that?’ after sickening racist abuse from the Bulgaria supporters ???????? #avfc #buleng pic.twitter.com/mFGwoVSpXJ

Here’s what Balakov had to say:

“I condemn unconditionally all forms of racism as unacceptable behaviour that contradicts normal human relationships.

“I think that this form of prejudice should be buried deep in our past, and nobody should ever be subjected.

“I trained many Bulgarian teams with players of different backgrounds and never judged anyone about the colour of their skin. In addition, I have always actively participated in all initiatives involving unprivileged people or the needy.

“My comments before the game against England that Bulgaria had no problems with racism are based on the fact that the local championship has not seen such a problem on a large scale.

The Entire England team showed immense maturity in the way they handled the shocking abuse:

Not an easy situation to play in and not one which should be happening in 2019. Proud we rose above it to take three points but this needs stamping out. pic.twitter.com/jTnUGOa8z2

Balakov also added that the incidents may have just been ‘isolated cases’:

“There may have been isolated cases, but it’s definitely not something you see in the stadium.

“The majority of football fans do not take part in such chants, and I believe that was also the case in the game against England.

“One thing I would like to say very clearly is that as the stadium in Sofia has reported cases of racial discrimination, I sincerely apologise to the English footballers and those who feel offended.”

With UEFA now charging Bulgaria’s football federation, we hope that the punishments are severe enough – as this is the only thing that can prevent these incidents occurring again in the future.

Much more needs to be done to prevent players being subjected to this type of vile abuse.