If there’s one thing we can be sure of at Old Trafford on Sunday it’s Liverpool will get plenty of chances and the United keeper is going to be kept busy. It’s probably the one game this year that Ole Gunnar Solskjaer would want to have his star man available.

That looks unlikely after David de Gea was injured during Spain’s game against Sweden last night. It seems he injured himself trying to kick the ball which is never a good sign.

A report from AS has confirmed the keeper had picked up an injury and gave an update on his condition. They report he has “puncture in his abductor” which does not sound promising ahead of Liverpool’s visit at the weekend.

At this point he hasn’t been officially ruled out, but if he has to try and play through an injury it’s unlikely he will be at his best. It also suggest he might have some issues trying to kick the ball, which will only play into Klopp’s hands as he can get his team to press very high knowing the ball won’t be going long.

The Spanish keeper has been going through a tough spell with a few mistakes creeping into his game recently. Despite that, he’s still one of the best keepers in the world and Sergio Romero is a big step down in quality. 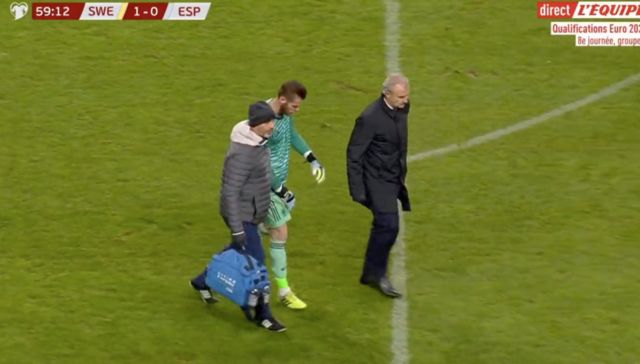 de Gea going off with an injury

There’s a strange feeling about this game. Usually a Liverpool trip to Old Trafford would be billed as one of the biggest games of the season, this one feels like United would be happy to escape without a humiliating defeat.