Of course football is a team sport, there isn’t a single player in the world who could actually single handedly win any trophies. Despite that there are a couple of players who are capable of dragging just about any team to success.

One of those is Lionel Messi who has just celebrated his sixth Golden Shoe award, his third in a row for the player with the most goals in a major league. In his speech he thanked the two players he felt were the most important in helping him win that award, one of them might be a bit surprising.

According to a report by Football-Espana, the players in question were Luis Suarez and Jordi Alba. Suarez seems like an obvious one to thank given his work rate and skill up front which makes plenty of space for Messi to operate in.

Jordi Alba could come as a bit of a surprise but it also makes sense. One of the main reasons that Messi is so successful is he plays in a well balanced team that give the opposition plenty of things to worry about. Alba marauds down the left flank and causes a constant problem down that side.

That means the opposition can’t focus all of their efforts on trying to overload on Messi’s side in an attempt to overwhelm him. They could try, but it just means that Alba would have so much room to wreak havoc. 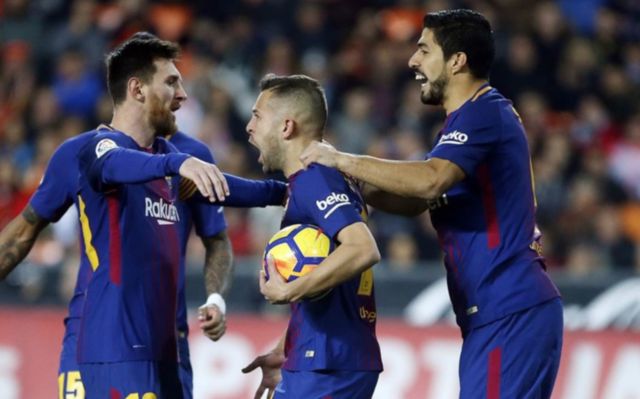 Alba and Suarez are key to Messi’s success

The left back is also one of the most unselfish players when it comes to cutting the ball back for a teammate. He rarely shoots, so Messi knows he just has to get towards the penalty spot and more often that not, Alba will give him a goal on a plate. He’s been credited with over 50 assists through his La Liga career so he’s a steady provider of goals.

It looks like all of this hasn’t been overlooked by Messi either, who certainly seems grateful for Alba’s contributions throughout last season.