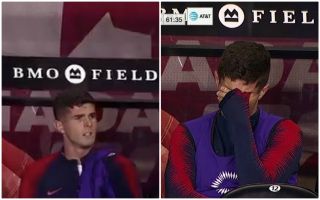 Chelsea star Christian Pulisic was seriously upset after being subbed off for the USA in their crucial clash with rivals Canada this morning, he was left crying.

Christian Pulisic was brought off for the United States football team in the 59th minute of their massive clash with rivals Canada earlier this morning.

The 21-year-old was frustrated after being substituted, it was revealed that the ace was taken off due to flu-like symptoms – but he appeared to tell the boss ‘I’m fine’.

Pulisic appeared to be crying after taking his seat on the bench, the ace seems to be having a really difficult time right now.

The tricky winger wasn’t happy to be brought off in his country’s crucial clash:

Christian Pulisic frustrated after coming off against Canada.pic.twitter.com/ulHoYe4tl3

Pulisic not happy after being subbed pic.twitter.com/B5aI6RKJQ8

The United States eventually lost the crucial clash 2-0, this has sparked a new low for the national team and the future of Gregg Berhalter is uncertain after the defeat.