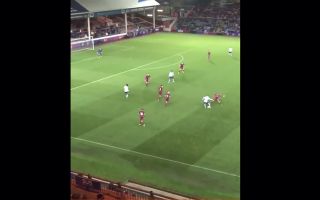 Manchester United ace Brandon Williams showed off some stunning dribbling with this sensational run for England’s Under-20s, what a goal this would’ve been.

Manchester United left-back Brandon Williams showed off his confidence by pulling off a Gareth Bale-esque run for England’s Under-20s in their defeat against the Czech Republic on Monday night.

Williams received the ball on the left-wing from fellow United ace Angel Gomes and decided to cut into the middle of the pitch.

The full-back showed off lovely footwork by effortlessly gliding past a defender before using quick feet to get past another.

The youngster then pulled off a superb piece of skill to beat another defender before charging towards goal, the ace was crowded out and his strike on goal was deflected.

The ball fell to West Bromwich Albion starlet Jonathan Leko and the forward put his volley wide of the goal.

I counted at least five successful take-ons in this clip.

Take a look at the youngster’s impressive run below:

Here’s how some United fans reacted to the superb run:

Just saw some flashes of a prime Marcelo in him. He is promising ??

He has to be United’s LB

We found the new Evra ?

Been saying it for months, he’s much better than shaw.

I’ve been saying Mans got sauce . Time for him to be put ahead of Shaw and Young .

Williams is the latest Red Devils academy star to make his debut for the first-team.

The ace has two appearances to his name and this clip will undoubtedly lead to fans calling for Solskjaer to hand the full-back his Premier League debut.