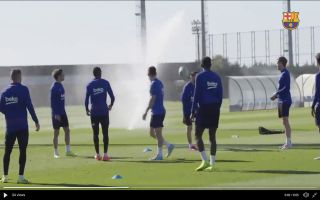 Five-time Ballon d’Or winner Lionel Messi showed off his unbelievable skill by pulling off an insane piece of ball control during a Barcelona training session.

During a training session with Barcelona, Lionel Messi has proved his extraordinary talents once again by effortless controlling the ball with a touch that we can barely describe.

The Argentinean talisman controlled the ball with the back of his leg and continued to go on like nothing had happened.

I guess the closest piece of skill to liken this to would be that of a scorpion kick. Seems like Messi has invented the Scorpion touch.

Take a look at Messi making something unbelievable look effortless:

The most surprising takeaway from this magical piece of skill is that Messi’s Barcelona teammates don’t even react to the superstar’s stunning touch.

The fact that they aren’t surprised shows that the 32-year-old produces pieces of magic like this on a daily basis.