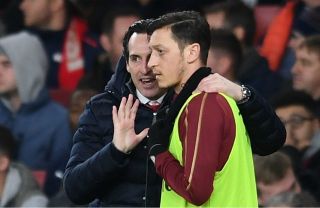 Mesut Ozil has held a brilliantly in-depth and honest interview as he discusses various issues including his struggles at Arsenal so far this season.

The 31-year-old has been limited to just two appearances so far in this campaign, and although he has struggled with illness and issues off the pitch, he has also been left out by Unai Emery despite seemingly being available for selection.

There were similar situations last season as Ozil wasn’t always a certainty for the starting XI, while the Sun note how even Arsenal chief Raul Sanllehi echoed Emery’s perspective of Ozil needing to work hard in training to force his way back into the side.

Speculation has unsurprisingly been rife as a result, with rumours constantly linking Ozil with an exit from Arsenal with the report above suggesting that a switch to Turkey could be a possibility next year.

However, based on Ozil’s comments below, he has no intention of leaving the Emirates any time soon, and has not only played down suggestions that there are ongoing issues between him and Emery, but he has also reiterated that he will continue to give everything in order to be a protagonist for the Gunners again moving forward.

While other key figures have seemingly come forward and had their say in public, Ozil has now broken his silence on key matters but has done so in a calm and composed manner rather than deciding to create controversy in north London.

“All I know is what has already been said,” Ozil told The Athletic. “It’s disappointing, of course. But as a professional footballer, I have to respect the decision of the coach. Not being involved, watching from home, makes me feel helpless.

“I want to be part of the side, I want to support my team-mates to succeed. I’m not training all the time just for the sake of it, I’m ready to play. This should not be about me or the coach, only the club. I have to give everything, be fit and focused, and I’m training hard to be ready.

“I’ve worked under some of the biggest coaches in the world — Arsene, Jose Mourinho, Joachim Low — and always I show respect. It’s the same for Unai.

“We might not see eye-to-eye on everything but that’s normal, it’s life and it’s the same with my family and friends. You have to accept it and go forward.

“I don’t think that will happen [not selected again]. I will play. I believe in myself to do what he asks of me and I want to help the club to reach our goals.”

Given Arsenal are looking to compete on multiple fronts and will need different characteristics at times depending on the opposition, it’s highly likely that Ozil will get playing time in the coming months.

Nevertheless, a player of his quality and experience will surely want more than just a rotation or squad role, and so time will tell if he can re-establish himself under Emery this season or if perhaps an exit next year is the most sensible decision for his career.

For now though, his comments should help dismiss any suggestions that there are problems behind the scenes at Arsenal, as he has chosen not to hit out at Emery and paints a relatively positive picture of both his situation at the Emirates and what is needed moving forward.