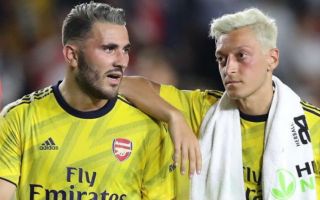 Mesut Ozil has opened up and given an in-depth account of the carjacking ordeal that he and Arsenal teammate Sead Kolasinac went through along with his wife.

As noted by BBC Sport, the pair were targeted back in July and two men have since been identified as being behind the attempted robbery while one has already pleaded guilty, with the BBC noting previously that it was indeed a carjacking attempt.

SEE MORE: ‘It’s always my fault’ and ‘I will never change’ – Mesut Ozil hits back at critics over big-game troubles and demeanour

It came after CCTV footage showed Kolasinac fighting off the pair as he tried to get into Ozil’s car which was parked outside his house before the two men followed them and continued their attempt to rob them.

Fortunately, all three were unharmed and escaped without any injuries or any items being taken, and they will undoubtedly feel relieved that those behind the incident are now facing punishment.

However, Ozil has sat down with the Athletic and given a detailed account of how the situation unfolded, while specifically insisting that he was constantly thinking about his wife and Arsenal teammate.

“I drove from my house to Sead’s,” Ozil told The Athletic. “He was outside and we spoke. My wife was sitting next to me. Then these guys came. Then we noticed that they had a weapon and something was going wrong. They obviously saw the big car and because Sead had just handed me something, they must have noticed he was wearing an expensive watch.

“They told him directly, ‘Give us your watch!’. Sead’s reaction was really, really brave because he attacked one of the attackers. The second one was in front of my car on his moped so I couldn’t drive.
“We were newly wed and I was scared about my wife. I was scared about Sead. I wasn’t thinking about myself. I was worried they were going to open my wife’s door and they tried, so I reached across her to keep it closed.

“I saw one chance to drive. If they got to my wife, something terrible might have happened to her. It was going so quickly that you can’t think properly. I drove a little bit forwards and backwards to try and get the moped away. I told Sead, “Jump in! Jump in!” and thankfully he did. The second guy tried again to get in. Sead closed the door and I made a U-turn. There was a construction site there and they took bricks and stones to throw at us.

“I started driving but they followed. I was driving very fast but they kept coming close on the moped. I tried to move the car, block them, escape, but each time they would be there. My wife was extremely scared.

“Nothing happened to us, that’s the most important thing.”

The 31-year-old went on to note that it affected his wife in particular, but it never forced them to consider a permanent move away from London.

It would have been a difficult situation for Ozil even in the weeks that followed as he continued training and left his wife at home alone, but thankfully it appears as though the matter should come to an end before the end of the year.

Nevertheless, it was undoubtedly a terrifying ordeal to go through based on the account given by Ozil above, and it’s a huge relief to know that the Arsenal pair weren’t hurt and that Ozil ultimately succeeded in keeping his wife out of harm’s way too.

The interview with the Athletic is undoubtedly one well worth reading, as the German playmaker opens up on various topics including his future at Arsenal and his relationship with Unai Emery, and his honesty and desire to be so forthcoming should be commended, even about an emotional and scary experience such as this one.