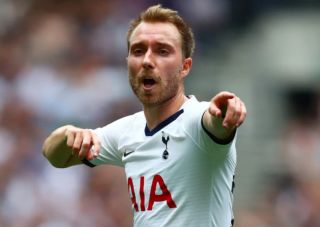 Tottenham could reportedly swoop for Real Madrid playmaker Isco if they are forced to replace Christian Eriksen in January.

The Danish international will see his current contract with Spurs expire next summer, and so to avoid a nightmare scenario in which they lose him for free, Tottenham could look to offload him in January.

SEE MORE: Great news for Tottenham: Double injury boost for Pochettino as pair back in training

Any fee generated from his sale could then go towards signing a replacement, and reports in Spain are suggesting that Mauricio Pochettino could be in a strong position to prise Isco away from the Bernabeu and take him to north London.

As reported by El Desmarque, and as per the Express, it’s suggested that Tottenham are in pole position for Isco, but ultimately it will depend on Eriksen leaving first, with Real Madrid even touted as a possible destination for the Spurs ace.

Further, it’s added that Bayern Munich are also interested in Isco, and so perhaps Spurs will face competition in the New Year to land the Spaniard’s signature.

Isco, 27, has struggled in truth to showcase his quality and fulfil his potential as he has just 48 goals and 52 assists in 280 appearances for Real Madrid.

Given the ability that he possesses, more is arguably expected of him, but with competition for places fierce at Real Madrid after the summer arrival of Eden Hazard in particular, it’s seemingly going to be difficult for the technically-gifted playmaker to make his mark with Los Blancos.

With that in mind, a switch to Tottenham could suit all parties and give him a chance to showcase his class in the Premier League especially in filling a possible void left behind by Eriksen, but time will tell if the pieces fall into place for such a switch to materialise in the January transfer window.