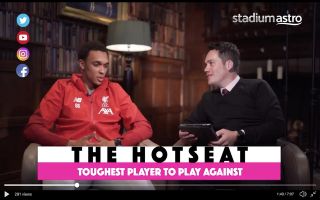 Liverpool defender Trent Alexander-Arnold has revealed the toughest player he’s played against in an interview. Here’s what the ace had to say on this superstar.

The Englishman managed to keep the Barcelona superstar quiet in Liverpool’s historic 4-0 victory over the Blaugrana to lead the Reds to the Champions League final last season.

Alexander-Arnold didn’t even hesitate as he revealed that the Argentinean talisman was the most talented player he’s had to deal with on the pitch.

The boyhood Liverpool fan revealed that Messi “can do everything” and added that the 32-year-old ‘does everything better than everyone else’.

The full-back makes the admission just over a minute into his interview:

How well do you know Trent Alexander-Arnold?@adamcarruthers got him on #TheHotSeat to answer a few questions about himself…… pic.twitter.com/cIXwFOqpPw

Alexander-Arnold showed that his game has come on leaps and bounds under Jurgen Klopp when he dealt with the superstar when he was just 20 years old.

The Liverpool star is quickly establishing himself as one of the best full-back’s in the league, his partnership with Andy Robertson on the flanks could actually go down as one of the Premier League’s best ever.

Alexander-Arnold turned 21 years old earlier this month and it looks as though the ace is in line to take his game to the next level as he continues to chip in with assists for the Reds.

The Reds star will battle with the likes of Kieran Trippier and Manchester United’s Aaron Wan-Bissaka for the starting spot as England’s right-back for the Euros next summer.

Trent definitely looks as though he’s winning that battle so far.