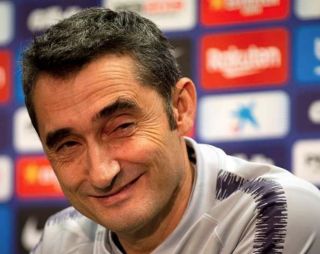 Barcelona have been dealt a big boost ahead of their match against Eibar this weekend, after it was confirmed that both Samuel Umtiti and Junior Firpo have been declared fit for the game.

Both Umtiti and Firpo have been missing in recent weeks due to injury, however now, it seems like the pair are fit again just in time for tomorrow’s game at the Ipurua.

This news was confirmed by the club themselves, who declared that the duo will be available for selection for their away La Liga clash vs Eibar.

This, in turn, comes after the defenders were included in the club’s squad by Valverde for their match tomorrow, however as shown below, neither stars were cleared to play by the club’s medical staff at that point.

Given that Gerard Pique it out of tomorrow’s game through suspension, this news regarding Umtiti will definitely be come as a boost for the Blaugrana.

The Frenchman hasn’t had much game time since the start of last season, something that’s mainly be down to his struggle to maintain fitness and stay clear of injuries.

However now, it seems like Umtiti could be about to get some valuable game time under his belt following this news.

Given that Jordi Alba has been missing in recent weeks through injuries troubles of his own, this news regarding Firpo also comes at a good time.

The Spaniard scored his first goal for the club during their 2-0 win against Getafe earlier this month, and should he play tomorrow, he’ll surely be looking to add to that, as he looks to help Barca win their fourth league game in a row.