It’s pretty clear that nobody really knows how to solve the racism problem in football, if they did then it wouldn’t be a problem anymore. The real issue is it’s not only football’s problem to solve, it’s a societal issue with the amount of idiots multiplying at an alarming rate.

It seems like heads have begun to roll after the awful scenes in Bulgaria during the game with England this week. There’s no way the coach can be help responsible for the actual views of the people watching, but his comments only made things worse.

As a result the BBC have just reported that he has resigned from his position as the manager of the Bulgarian national team. He seems to be claiming that he didn’t actually hear any of the racist abuse in the stadium, but everybody could hear what was going on.

Following his resignation he had the following to say:

“I am no longer national team coach. I wish success to the next coach, the situation is not rosy at the moment. I have never been a coach in such an atmosphere.”

“I tried to pick up the players in the locker room. There was no rebellion. The players were so mentally stressed by what was happening on the pitch that they lacked the energy to rebel.”

His comments after the game have done him no favours when it comes to trying to stamp racism out of the game. He had said: “I was concentrated on the game.”I didn’t actually hear anything but I just talked to the English press downstairs and I told them that if this is proven to be true, then we have to be ashamed and we have to apologise for it.But, once again, first it has to be proven to be true.” 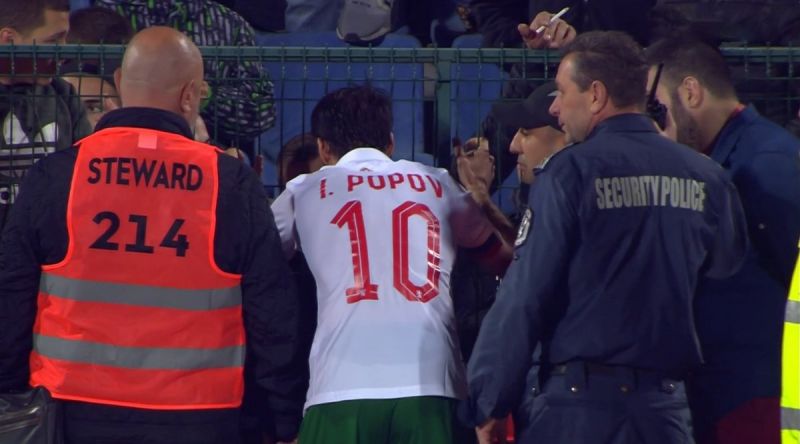 Popov tries to plead with the home fans

It seems that some arrests and bans have been handed out following the game. It’s a pretty toxic situation for the next boss to step into. It’s not really footballing problems he will face, but actually trying to rebuild the reputation of his country in the eyes of the footballing world.

It’s been a shameful incident that nobody in the Bulgarian camp can really hold their heads high after.