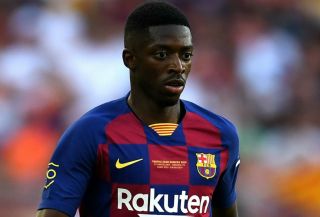 Barcelona stalwart Arturo Vidal has revealed the advice that he has given Ousmane Dembele in order to ensure that he goes on to fulfil his potential.

The 22-year-old joined the Catalan giants from Borussia Dortmund in 2017 and has gone on to score 19 goals and provide 17 assists in 69 appearances.

Considering he has been blighted by injuries and has lacked consistency in terms of his minutes and form since his arrival, those are decent numbers, and they would perhaps be much better if he was able to avoid injuries and distractions off the pitch.

That is essentially the advice that Vidal has now passed onto the Frenchman, as he believes that if Dembele can look after himself better and fully dedicate himself to football, he will become a Barcelona great and avoid the risk of seeing his talent go to waste.

“Ousmane is a football player who has a crazy talent. When he reaches maturity, he will be an important player for Barça and for France. But, clearly, he has to mature. Listen to your body, be better prepared to avoid injuries. If you want to be the best, you should get up, eat and go to bed thinking about football. I think Ousmane will realise at some point that he has to do more,” he is quoted as telling L’Equipe by Mundo Deportivo.

“I talk to him a lot. He is a good lad and he is the first to want to be the best. He arrived at Barça at age 20, without much experience. Ousmane must become aware of what he really wants in life, know where he plays and who he plays with. But I think I see an evolution. It must continue like this.”

On one hand, it could be argued that it is ultimately a process for these talented young players and that eventually things will click into place and they will realise their potential.

However, we have also seen many cases where they fail to deliver on that promise and don’t reach the heights many expected them to and ultimately they’re in control of their own future and should know these basic principles themselves.

In turn, Dembele will need to figure things out sooner rather than later to avoid falling into that second category, as he has a wonderful opportunity in his career right now to be a pivotal part of Barcelona’s pursuit of success not only now but also in the years after Lionel Messi potentially moves on or retires.